I am starting this blog at a strange time, with the world variously locked down in order to manage the spread of Coronavirus. Much of my art practice focuses on how we visualise health and disease in our bodies, often at a microscopic level. At present we are being bombarded with images with most news stories and programmes accompanied colourful and intricate representations of the virus, embellished to work well in the media environment. Implicitly or explicitly we are being invited to imagine the virus entering our own cells, with all that implies. If it weren’t all so grim, this would be a bonanza for an artist who is concerned with how we imagine disease at a cellular level.

But at the moment everything is, in fact, pretty grim, and I am hearing every day from friends and their families how badly affected they are by the virus or the measures in place to suppress it. So instead of dwelling on Coronavirus, just now I will be writing about the projects that I already have underway. And maybe I’ll come back to thinking about the visualisation of viruses in relation to my practice at a later date. (Who knows? At the moment, nothing is certain).

So, the two projects on my radar at the moment are also both about health and the body.

My main focus at present is a collaboration with researchers at Leeds University who are investigating the possibilities for using a membrane disrupting peptide to develop new cancer treatments. They have commissioned me to make an artwork inspired by their research which will take up residence at St James University Hospital in Leeds, ultimately in their new Clinical Research Facility. You’ll find most of my initial blogs are about how this project is developing, both in terms of learning some of the science from the very patient team in Leeds, to starting to make creative work.

My other project is at an earlier stage of development, although I have been thinking about it for longer. This is a project to create a body of artwork exploring the experience, incidence and implications of pressure ulcers. Incredibly prevalent, pressure ulcers are little talked about but have a fierce impact on those who experience them, and they can life-threatening to the elderly and vulnerable if their ulcers become severe.

Over the coming weeks and months, I shall be writing about my thoughts, research, creative exploration and development for these projects and maybe some others. I would love it if you would join me by subscribing, commenting, or just reading along and enjoying. 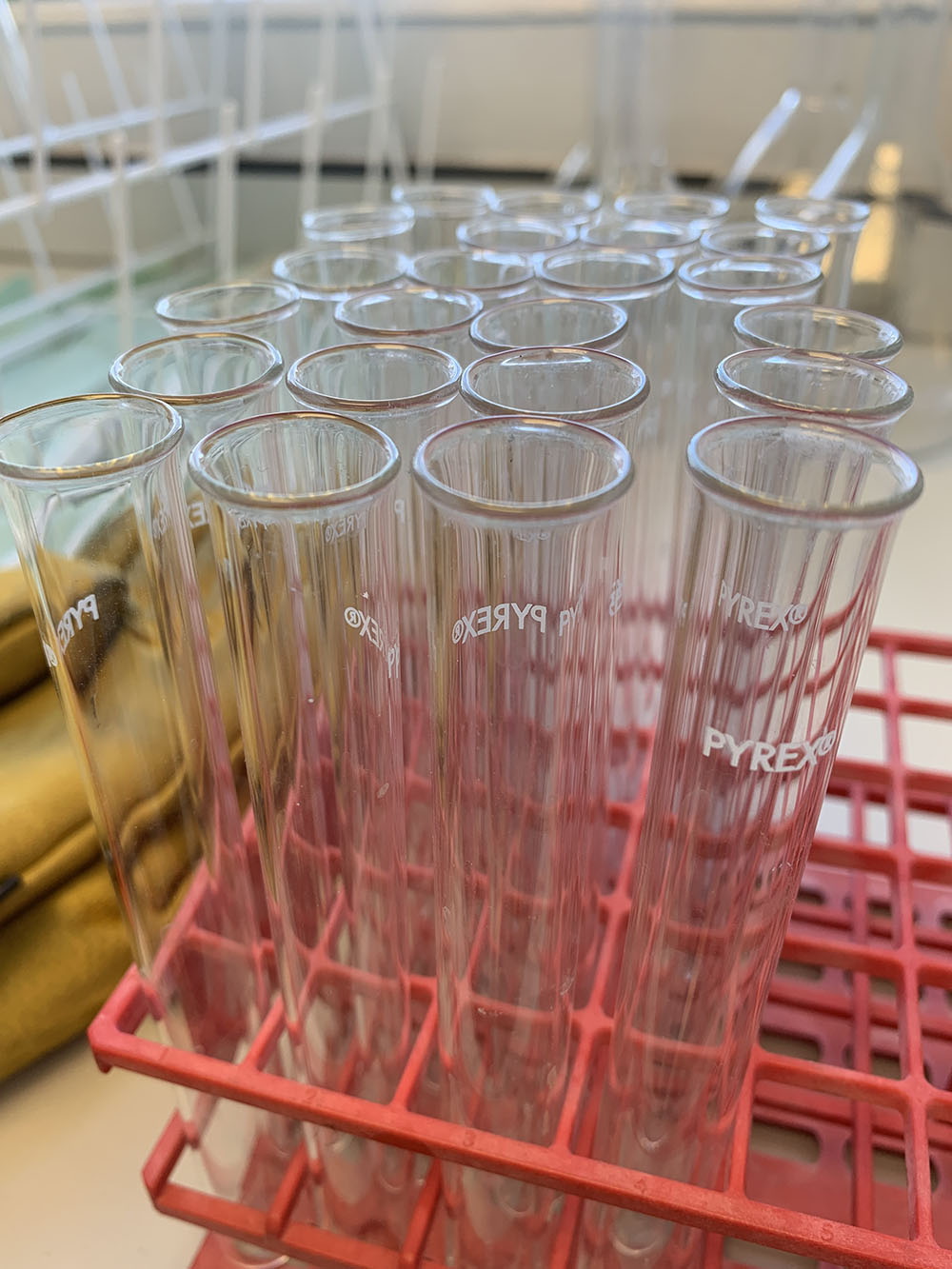 If you haven’t seen my post about my first day visiting the labs, it’s probably worth starting there. If you have, welcome to day two!

On my second day I went back to meet Andrew at the School of Chemistry. We chatted while he prepared a lipid mixture to ‘grow’ some GUVs (Giant Unilamellar Vesicles). He prepared two mixtures. One he knew would make it quite tricky to grow the GUVs but would give us the chance to run a new experiment if we got good GUVs, the other was a more reliable but less exciting mix so that we would have something to look at through the confocal microscope later if the first mix failed.

Making GUVs is not done using the same technique as preparing Large vesicles (LUVs), which is what Luke, a Masters student in the lab, was involved in, alongside us in the lab. (The ‘Giant’ and the ‘Large’ are all relative of course – we are talking microns here). He recounted how he had been trying for months to create GUVs of a certain type and over those several months it had only worked well once – on a day when, atypically, he didn’t have the info to replicate the conditions. I compared that to trying to repeat firings to try and find a good programme for my pate de verre sacks – my Imperfect Vessels – which in the end took about 12 firings to get a programme that worked the way I wanted it to. That conversation made me feel a good deal less patient or diligent than I had.

Having wired up the GUVs and popped them into the oven to form, we went to look at the chemical robot. This is a machine for setting up plates with multiple samples at a time according to whatever is programmed for a specific set of experiments. It was strangely mesmerising – whoever had developed the machine had programmed in a set of elegant flourishes – not obviously functional, but very engaging. As the pipettes dipped towards the plates they each dropped down in turn, creating a lovely wave of pipettes heading into the wells with their samples. Similarly, there was a moment’s dramatic pause before the used pipette heads were all knocked off and the sequence started again. A kind of magic.

In a quiet moment between experiments etc, we started talking about the Brazilian wasp from which the MP1 peptide is drawn. It’s called Polybia Paulista and it’s massive!

Later in the afternoon we took a look at our GUVs through the confocal microscope. Here are some of the images I snapped off the screen

The images are super-seductive, with the bright coloured labelling (this is showing phase separation – more of that later). But although the temptation is to leap into making bright, spotty, luminescent glass forms, I am not sure that’s where i should ultimately be headed.

In the evening, Paul and I continued the conversations over dinner, and then met up with some of his colleagues from The Superposition, an amazing art/science collective in Leeds. It was a lovely evening and brilliant to chat, but everyone’s anxiety about Coronavirus was already surfacing, and i headed off feeling a bit sombre. 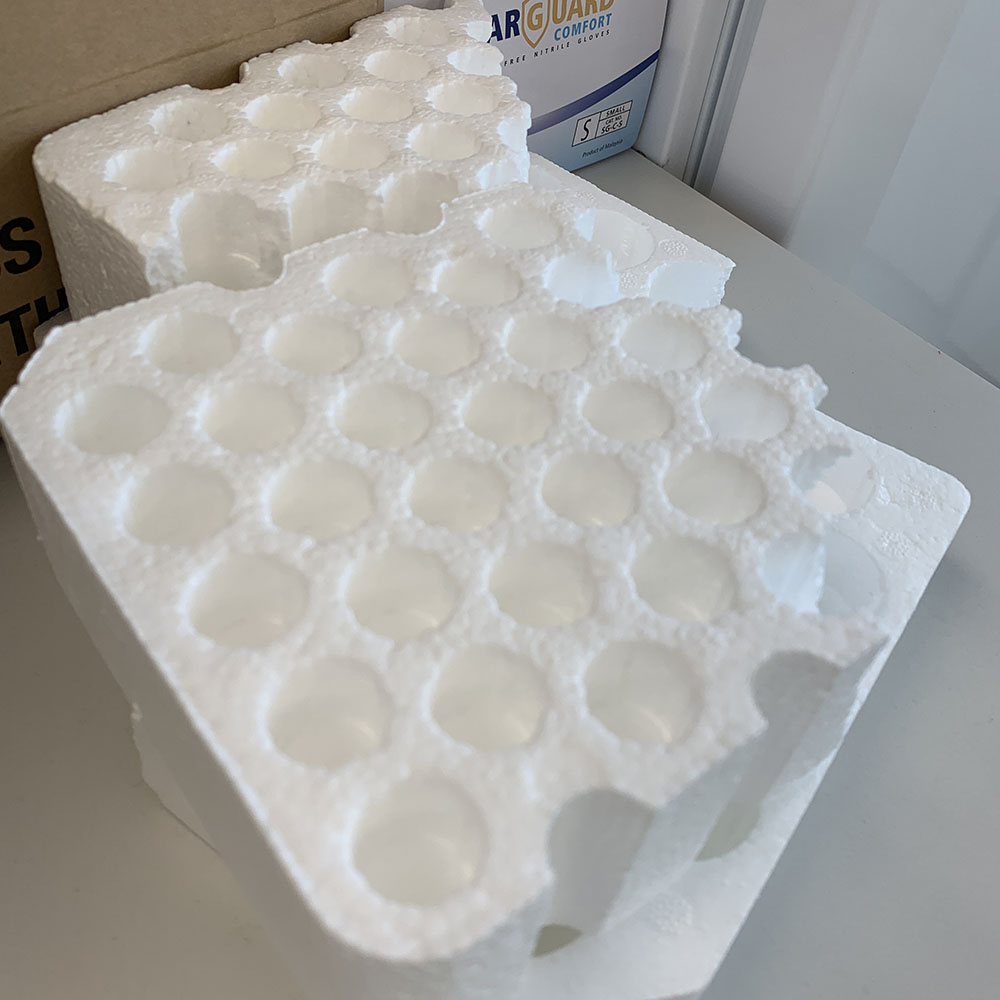 So, last week I travelled up to Leeds to visit the team doing the research into membrane disrupting peptides that is behind my commission. This post is really a brief skip across my time spent in the labs, the basic narrative of the three days spent in the lab environment. There will be other posts about some of the conversations, some of my impressions and my thinking as it develops – in these days of Coronavirus isolation, I am taking my time to process my thoughts – it appears there’s no rush at the moment so I am going to make the most of that!

I arrived at the Uni around midday to be met by Paul, and we had an hour or so to catch up before he had organised a group meeting so i could get to know the rest of the team and start to try and understand the project, the research and the basics of the science behind what they are doing. Before I go any further, I should say that everyone was welcoming, super-patient with all my (often daft) questions and bent over backwards to help me understand and be inspired. Everything that follows in this post (and others) is my interpretation of what I learned, and I must say that any mistakes or strange extrapolations are all mine.

Over a sandwich, Paul took me through some of the very basics about the science of membranes and the chemistry of lipids. We talked about morphology, hydrophobia and hydrophilia, and heads and tails. We wandered through the basics of peptides, the specific peptide they are working with (which I now know as MP1) and peptide variants. We talked about the effects of soap on membranes – super topical in the developing Coronavirus context. And then we went to the group meeting.

The group working on the project on a day to day basis is the coming together of two perspectives. Paul and Andrew, based in the School of Chemistry, come from what I think of as the ‘molecular point of view’, focusing on the behaviour of the lipids, peptides structurally and chemically. Tom and Arindam focus on the ‘biological perspective’, working with cell lines and 3D cell clusters (spheroids and similar), testing the peptide on live cells rather than vesicles created out of specific cocktails of lipids. That’s actually quite a simplistic way to look at it, but at present it provides me with a mental framework that sparks ideas. But more of that later.

That evening, Tom and I went out to eat pasta and chat about science, art, northern towns, biology and the funding of scientific journals – a bleedin’ shocker as far as I’m concerned, which I am sure I shall come back to in due course. If anyone is interested in some of the background in the meantime though, I would recommend reading this Guardian Long Read about the history and development of science publishing.

I am just embarking on a new project, a commission to make an artwork for the Clinical Research Facility at St James University Hospital in Leeds. The piece is to be inspired by the EPSRC funded research of the Beales Research Group at Leeds University about membrane disrupting peptides and potential new cancer treatments.

You can read a quick summary of what the research is about here (the EPSRC info) or here (a short BBC News story from the inception of the research).

Tomorrow I head to Leeds to begin absorbing information, environment and ideas from the research group – three days of intense immersion in their world.  I can’t wait!

Julie Light is an artist working on themes of health, illness and visualising the body in an age where the invisible is increasingly visible.  Follow Julie’s work and projects with her blog posts or see more of her work on www.julielight.co.uk